How do I set up my SonoPlus?

For AirPlay, simply connect the SonoPlus to your network using the Ethernet cable, then plug in the power supply and connect it to the USB-C power socket on the SonoPlus. That’s it. See Installation to learn more.

How do I use SonoPlus AirPlay?

Your older Sonos players appear as new AirPlay speakers, and they can be used and controlled exactly like any other AirPlay devices. The new SonoPlus speakers are denoted by a plus (‘+’) after their Sonos room name, e.g.: 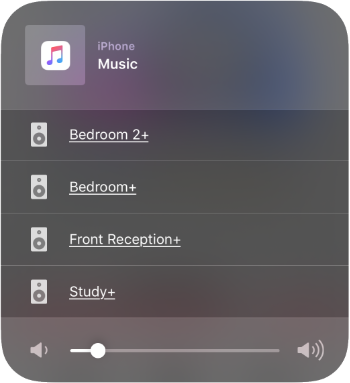 SonoPlus supports multiple simultaneous AirPlay streams from different Apple devices to different Sonos speakers, so you only need one SonoPlus device to support all of your Sonos players.

Speaker volume, play/pause, next/previous track are all controlled by the sending device, as with any other AirPlay speaker.

In the Sonos apps, you’ll see that audio is being sent to your Sonos player(s) via your SonoPlus: 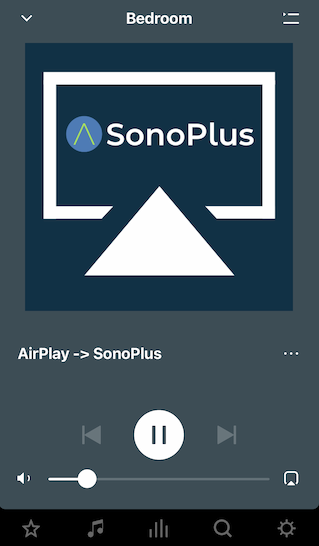 You can also adjust the speaker volume and stop the audio stream, directly from the Sonos app.

Grouping Sonos players via the Sonos app works in the normal way – the AirPlay stream will be sent to all of the grouped players, with Sonos managing the synchronised distribution as with any other audio source.

How does SonoPlus AirPlay work?

SonoPlus detects all Sonos players, and creates AirPlay targets for each of them. When an AirPlay stream is started, SonoPlus acts as a bridge between the AirPlay device and speaker, and transforms the audio stream into a protocol that Sonos can play.

SonoPlus configures AirConnect to exclude any newer Sonos players that already support AirPlay 2, to avoid any duplication of speakers in the AirPlay menus.

We contribute to AirConnect’s development by submitting code improvements, suggesting feature enhancements, and reporting defects. We also independently test every new AirConnect release before making it available on SonoPlus.

Is AirPlay v1 any good?

How is SonoPlus managed and kept up-to-date? Is it secure?

We use the Balena

Internet of Things (IoT) service to manage all SonoPlus devices, including keeping the software secure and functional, as well as adding functionality over time.

This approach has a strong focus on security

both in terms of the software that runs on SonoPlus devices as well as the means by which the devices are remotely accessed and managed.

Which Sonos players are supported?

SonoPlus supports all Sonos players ever produced. This includes the newer players that provide AirPlay 2, but these are excluded by SonoPlus to avoid duplicate speakers in your AirPlay list.

If you want a plug-and-play solution that delivers a reliable, very easy to set up, and simple to use AirPlay capability for your non-AirPlay Sonos players, then SonoPlus is a great fit for your needs.

If you’re technically adept and can set up AirConnect on your own Raspberry Pi (or other computer), and keep it up-to-date and working, then it’s definitely worth having a go. If you can set up a Docker

environment on a Raspberry Pi, you could use the publicly available AirConnect Docker image

that we maintain at Docker Hub.

What is SonoPlus not good for?

SonoPlus provides the original version of the AirPlay protocol, not the newer AirPlay 2 version. This means that it doesn’t include the enhancements in AirPlay 2, such as the ability to synchronise audio with video playback on the sending device.

Is there a software-only version of SonoPlus?

Not yet, but possibly in the future. We want to control the exact hardware specifications for the time being, to deliver a consistently good experience.

Why do you use a Raspberry Pi as the basis for SonoPlus?

The Raspberry Pi is ideally suited for the SonoPlus application. It’s small, silent, reliable, has low power demands, and has regulatory approval in all target geographies. And, it has more than enough computing power to deliver AirPlay capability as well as for a range of upcoming new features.

AirPlay and Instant Music Library are just the initial features in a series of Sonos enhancement functions under development for SonoPlus, which is designed to support multiple complementary features that will be delivered automatically as software updates.

Any other questions? Please get in touch at avantrec.ltd@gmail.com.